Magical scenes of Carnaval in Recife and Olinda

Recife and Olinda are two cities full of history located in the state of Pernambuco. But they’re also recognized as home to two of the most authentic Carnavals in Brazil, each in its own way. In the text below, the team at REMOTE Local Expert member Ideia Tours tells us a bit about the history of Brazilian Carnaval and invites us to celebrate the next event.

Carnaval is no doubt the most enthusiastically celebrated festival on the Brazilian calendar. Originally a Christian tradition brought to Brazil by the Portuguese, Carnaval has been influenced by a wide variety of cultures and cultural movements and today it is proudly considered the nation’s most precious cultural heritage.

When it comes to Brazilian Carnaval, most people think of Rio’s glamorous parades and samba schools, but the truth is that each region and even every city has its very own Carnaval traditions. In Recife, we celebrate our Carnaval in the cobblestone streets of the Old Towns of Olinda and Recife with loads of live music performances, local rhythms like frevo and maracatu – and Galo da Madrugada, the biggest street parade in the world.

Carnaval in Recife and Olinda is arguably the most picturesque in Brazil. It starts with a ‘pre-carnavalesca’ week with the ‘bloco’ Galo da Madrugada officially kicking off the festival on Saturday. Carnaval in Recife and Olinda is famous for its own rhythms, different from the samba of Rio de Janeiro and the axé of Salvador. The best-known rhythms are ‘maracatu’ (of African origin), ‘caboclinhos’ (when dancers in traditional indigenous garments beat out the rhythm with bows and arrows), and, of course, ‘frevo,’ the unique and effervescent dance from Recife!

Although the parades, shows and presentations through the streets and public squares of downtown Recife are not to be missed (especially at night), most will agree that it is Olinda that steals the show with its vibrant street carnival. It is characterized by various smaller parades that move chaotically and flamboyantly from one cobblestone street and square to the next. The musicians are led by giant dolls and followed by hordes of people frenetically dancing and chanting for days on end. Olinda has more than 400 carnival groups and each has its own route, colors, props, costumes and songs. The most famous groups are ‘O Elefante de Olinda’ and ‘Pitombeira dos Quatro Cantos’. 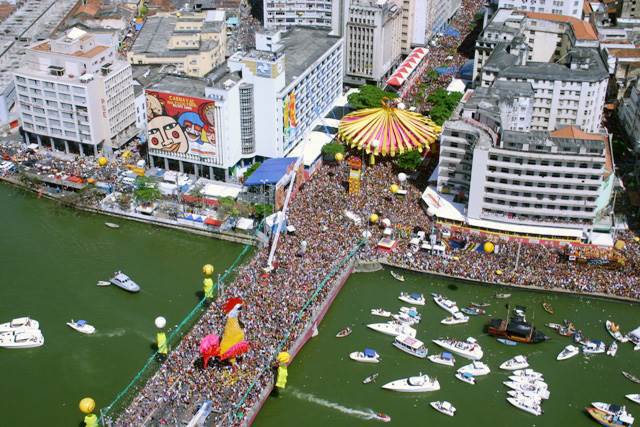 Officially, there are four days of Carnival (from Saturday to Tuesday), but that’s just not enough time to satisfy an entire year of anticipation! That’s why, about a month before the actual Carnaval, the cities start setting the mood with colorful pre-Carnival parties and parades. Because of the pandemic, Carnaval in 2022 has been scaled down and rescheduled for April, but from 2023 on, Carnival is scheduled in February as usual. Come join us!